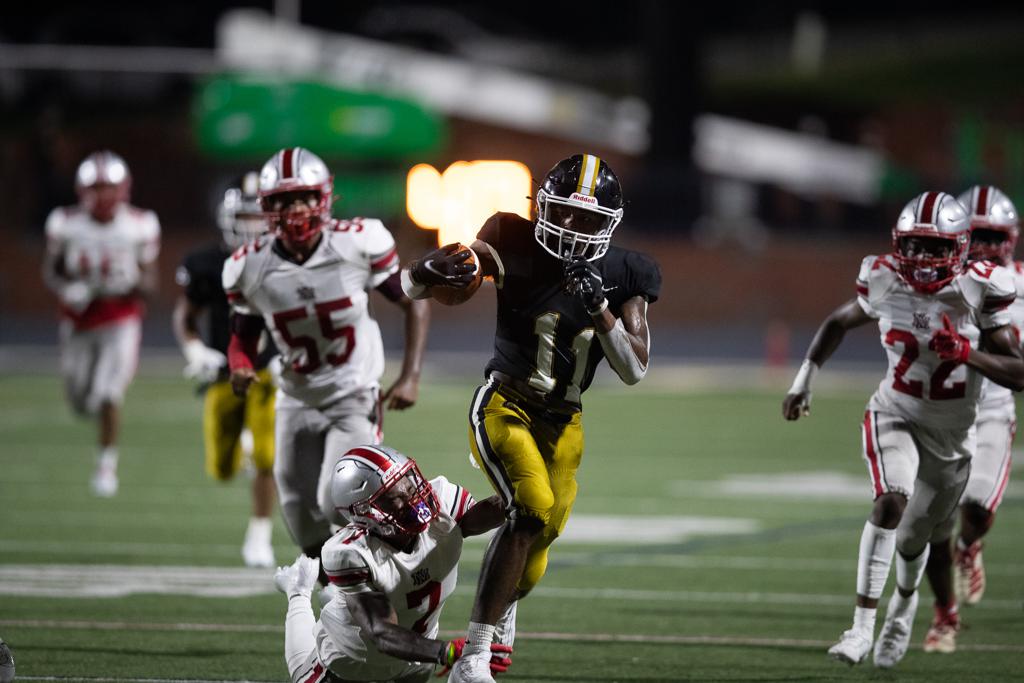 Terrell Carmicheal runs the ball against Newnan in the fall. Carmicheal has committed to play at the next level with Jacksonville State University.

Terrell Carmicheal needed his senior season to go well. Boy did it ever.

The Carrollton Trojans’ wide receiver caught 40 passes in 13 games for 784 yards and 11 touchdowns. He also threw two passes for 115 yards and a TD and rushed five times for 57 yards and a score.

He will put those talents on display at Jacksonville State next season.

Carmicheal signed a letter of intent to play for the Alabama school as soon as he was able to do so and immediately bookended his reaction to the opportunity with the same two words of elation.

“I’m excited,” Carmicheal said. “I feel like a burden was lifted. This process can take a lot out of you. Nonetheless, I’m EXCITED.”

He has decided to major in business and said Jacksonville State felt good from the start.

“I felt it was a great fit from the beginning I felt a connection,” Carmicheal said. “It’s a family atmosphere and I love that. I’m big on family and football and there I get the best of both worlds.”

For first-year Trojan football coach Joey King, Carmicheal was a seasoned leader with a desire to bounce back.

“He’s been great,” King said. His teammates selected him as a captain this year. I know he didn’t have the junior season that he wanted, so he committed a lot of time and hard work going into his senior year and it paid off. He had a very productive senior year for us offensively and gave us some quality reps at safety as well. I’m very proud of him and thankful he’ll continue his athletic and academic career at JSU”.

While moving forward with his career, Carmicheal said he will always be a Trojan at heart.

“Being a Trojan means being with a family that pushes you to be the best you,” Carmicheal said. “Being a Trojan I never felt alone and you can create a wonderful future for yourself. Black and Gold will forever be in my heart."